When is enough, enough?

For infertiles, this is something that after the second or third IVF - sometimes sooner and sometimes later - becomes something that completely occupies our mind. When have we given it everything we have to get pregnant?

Excerpt from The Inadequate Conception:
I’ve never been a quitter. I’ve always believed that if you work hard enough and put your mind to something, almost anything is achievable. In every other life pursuit that I’ve had, this theory has, for the most part, been accurate. But that’s not how it works in the infertility world. It’s a dimension where just because you flushed your birth control pills, have sex when you’re ovulating, or you get a major head start by having five day old embryos implanted, doesn’t mean you’ll get pregnant.
But, if you’ve been going through this stuff long enough, at some point, you may decide that it’s time to throw in the towel (or time to burn your menstrual cycle charts in the fireplace). There are plenty of reasons:
• Your frustration level is causing you to resemble the Wicked Witch of the West (“I’ll get you my little preggies, and your little diaper bag, too.”)
• You’re near financial ruin
• You’ve filled a landfill with ovulation test sticks and negative pregnancy tests
• Your age is now closer to that of a grandmother than a first-time mom
• You’ve achieved what some might consider “stalker status” with your fertility doctor
• It’s too hard to keep hoping and praying, only for a negative home pregnancy test or single-digit beta level to blow that dream to shreds

I know there are tons more. What didn't I list?
Posted by Lori LeRoy at 5:51 PM 3 comments:

Ahh...the Oscar nominations were announced this morning. Big deal, right? Typically, I'd say no, but not this year (OK, I do admit that it is to me since I'll once again be able to see Colin Firth in a tux. Can you say "dreamy"?)

Of course, when "the latest accessory on the red carpet is a baby bump!" the Academy Awards take on a whole new meaning.

Yes, that was a direct quote that I heard someone on E! say during their Red Carpet show during the Golden Globes as if a big belly is a Harry Winston million dollar necklace or the new Jimmy Choo's. Besides the fact that I have a real problem with someone calling a pregnancy an accessory (what does that say to young impressionable girls or us infertiles who have tried to get pregnant with all our might?), what the heck is up with all the movie stars with buns in the oven?

As many young actresses and pseudo celebrities have shown us, they don't always make the best decisions. So, why the sudden need to give birth?

I mean what's in the Evian that these celebs are drinking? Does the smog and traffic in LA encourage fertility? Does Botox and collagen actually mimic follistims and Femora? Or, is there some underground fertility doctor using unorthodox methods to get these waify girls knocked up? Whatever "it" is, I want to know about it.

Though in thinking about how much money I've spent trying to get pregnant, I could have just as easily stuffed a pillow in a pair of granny panties and bought a vintage Valentino with some awesome duds. Heck, I probably could've even afforded to pay Ryan Reynolds to walk me down the crimson rug with what I've paid in fertility treatments.
Posted by Lori LeRoy at 8:52 PM 9 comments:

My stint as a surrogate (yes, you read that correctly)

I've decided to become a surrogate. What?! You say. Has she had a uterus replacement surgery or some other wild treatment? And, why oh why is she being a surrogate for someone else instead of carrying a baby for her self?

Well, friends. It's because I have just become an alcohol surrogate for a friend who is pregnant. My warped or funny sense of humor (depending on how you see it) thought of this earlier this week. Two of my girlfriends and I meet for what are usually called Winey Wednesdays once a month and we split a bottle of wine (at a great restaurant that has them 50% off those nights). Anyway, since she can't drink, I designated myself as her alcohol surrogate.

I'm not a lush by any stretch of the imagination. One frozen margarita at our favorite cheap Mexican restaurant usually has me out and drooling on the couch by 8:30. But, I will sacrifice my body for her and any time she she wants a glass of wine, she can call me and I'll happily partake on her behalf.

I'd also be happy to become a surrogate of other things for pregnant people: a sushi surrogate, soft cheese surrogate, coffee/caffeine surrogate, deli meat surrogate (though I really only like turkey), and a flying in your last trimester surrogate (depending on where you want to go)...

I draw the line at becoming someone's litter box cleaner surrogate though.
Posted by Lori LeRoy at 7:44 AM 12 comments:

I KNEW I was on to something

It's no secret that I have tried very hard to find humor in this crazy journey called infertility. For me, it has been an invaluable activity in order to stay somewhat sane over the last several years.

And, apparently, science is proving that I'm on to something. Researchers in Israel studied a group of women going through IVF and they tested the hypothesis that laughter, a "natural non-stressor" could help women get pregnant more easily. See article. And, it worked.

Of course, in this study, they sent in clowns to the hospital on transfer days. I am not a fan of clowns in the least, nor are most women of child-bearing age that I know. I'd much, much rather watch Modern Family or How I Met Your Mother to get my giggle on.

And, I'd be remiss if I didn't recommend my funny, funny book, The Inadequate Conception, as an option for laughing that embryo into place.

I'm eager to see where this new research is headed. Can you imagine waking up to Jack Black or Ricky Gervais at the foot of your bed? Sure beats more progesterone gel up the ying-yang or sticking your feet over your head.
Posted by Lori LeRoy at 5:09 PM 5 comments:

Stork parking for moms to be

My sweet sister came up with the idea for this blog post because of this picture she took. She thinks that I should be able to park there. 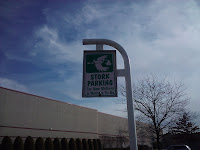 It says: "Stork Parking For New Mothers & Mothers to Be"

Besides the fact that I wouldn't do it just because I know that a waddling mom should totally be able to get a few steps closer to the door, and my fat rear needs to walk farther, would I be in violation if I parked here? I think not, as I am a mom to our son in Vietnam. He may not be with me in person, but he is in spirit, (though I pray he's walking hand-in-hand with me from the car to the grocery and soon).

It makes me think...what is the definition of a "mom to be"? Is it someone who has just started trying to conceive? A young girl who will be a mom in 20+ years? A woman waiting on her adoption? Someone who wishes like hell that one day a small fry will call her "mommy" even though that hasn't happen yet? Obviously, one "with child" counts, but what about all of the rest?

Clearly, "mother to be" has multiple meanings, and there's not one that's more correct than another. However, I have a feeling that this establishment probably meant "parking for one who is currently gestating a human life somewhere between embryo and infant." Still, I'd love to argue my case with some zit-faced kid wrangling shopping carts who tried to stop me from parking there. See blog post All of the crap without the benefit about my three-month prego-looking belly -- maybe I wouldn't get stopped, after all.

Before you know it, lazy women across the country are going to be stuffing their shirts with pillows just to get a prized parking spot.

Besides, it looks like the stork is carrying a bagette and not a baby. With the obesity epidemic in the U.S. perhaps that's what they mean instead.
Posted by Lori LeRoy at 8:21 PM 4 comments:

Back to the book

Last night was The Inadequate Conception's official debut at a book launch party. So, now all of my family and friends will read about some of the most intimate details of my life from scheduling sex to a strip tease in a hospital room. Not sure that I will be able to look at my boss in the eye tomorrow, but hopefully, it's for a good cause.

Truly, the reason I put all of this “out there” is to help other couples who have difficulties getting pregnant. And, if I can make one person laugh after all of the tears, I think telling you about my vaginal ultrasounds and sex on a schedule was worth it.

I'm working on a book signing in the Louisville area at a really cool local book store. The kind proprietor wrote a lovely piece about The Inadequate Conception.
Posted by Lori LeRoy at 4:07 PM 3 comments:

Out with the old

The birth of a new year symbolizes the ability to have a fresh start and reflect on your goals and dreams. In many cases, it also involves putting your head into a toilet, eating boiled cabbage with a dime in it, and watching some football.

It's also a good time to clean - whether it's detoxifying all of the sugar and treats from your body or going through your closet. Again, another way to re-energize and feel anew for the upcoming year.

Guess what I'm tossing out this January 2? A big box of Crinone progesterone gel. I've had a box in a bathroom drawer where I've stored all of my pre-pregnancy supplies for the last few years. It's the last TTC thing left since I stopped using ovulation prediction kits and all of my OIs and IVFs didn't work. And the last batch of HPTs that I bought were for a photo shoot.

I'm not really sure why I've saved it for this long. Sure I tend to save things I'll never use again like 12-year old utility bills and a pair of bike shorts that I wore in college, but I think there was something else holding me back from chucking this in the garbage. Perhaps hope? Perhaps the thought that someone else could use it (shit, this stuff is like $75 a box)? Perhaps getting rid of my last TTC item symbolized more than just giving me some more drawer space?

But, the expiration date is 01/2011 and I don't want to hang on to it any longer. Plus, it gives me major credit with my hubby for actually throwing something away.

Besides, I just went to Ulta and could use the room in that drawer for the bags of make up, hair products and face cleansers. If I can't get pregnant, at least I'm going to look good.

I thought about some ceremonious act to get rid of it - like playing "Pomp and Circumstance" as if it's some kind of graduation or burning it in a type of funeral pyre.

Instead, I simply smashed it down on top of some coffee grounds and cat litter. Maybe that's more appropriate anyway.
Posted by Lori LeRoy at 2:46 PM 3 comments: